The number of people arriving and departing through Phuket International Airport shows a marked year-on-year increase for July, with total passenger numbers up by 17.47 percent.

International travelers led the way, increasing to 224,361 arrivals and departures, up 47.15 percent. The total jumped above the half-million mark, to 507,698. Domestic travel, though, was virtually static, improving a mere 1.29 percent.

Based on these figures and what’s being said by tourism industry leaders, tourists appear to be ignoring national travel warnings and the prospect of a renewal of violence in Bangkok.

Direct flights to Phuket is one advantage that the southern resort capital has over other destinations within Thailand that require travel through Bangkok.

Total in-bound and out-bound flights through Phuket rose by 29.71 percent year-on-year in July, with international trips jumping by 34.65 percent. Flights in and out amounted to 3763. 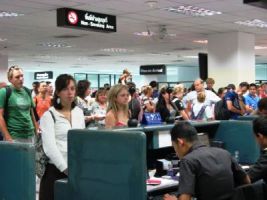 Steady increases are also reflected in the comparison between the period October-July 2009-2010 and October-July 2008-2009. Total passenger numbers are up by 25.90, with the international element increasing by 36.42 percent.

Total arrivals and departures through Phuket reached 5,768,200 in this latest period. Cargo tonnage has also increased by 50.87 percent.

More good news can be expected: last August marked a turnaround in a slide in numbers that extended back to October 2008. This August is expected to continue the 2010 recovery.

Phuket’s number-crunchers are anticipating continued growth in tourist numbers towards the 2010-2011high season, although some resorts have cut room rates to win back market share.