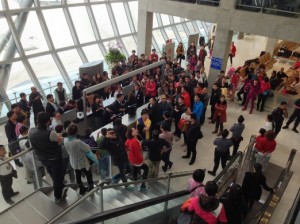 It’s been well documented over the last two to three years, that Asian investors have been buying property in Phuket in a seemingly frenzied state. However tourist numbers in this demographic, especially from China’s mainland, are soaring higher than the planes that bring them here.

Each year the arrivals touch down on the tarmac faster than the infrastructure can keep up with their broadening captivation. Take 2013 as an example. In the first half of the year, an approximate half a million vacationers flew the friendly skies for some sun and fun. Consider the dramatic comparison to 2007 where the number was a mere 40,000.

According to the Chinese Tourism Academy, Phuket was the number two destination in the world after Hong Kong. These holidaymakers are estimated to spend upwards of $US117.6 Billion annually on trips spanning the globe. Given the moderately short flight from China to Phuket (considered to be the under 6 hour ‘sweet spot’) it’s understandable why the island is their second choice following Hong Kong.

There have been concerns from the Phuket tourism and hotel industries regarding the influx of what is termed the Zero Dollar Tourist, aka, low-end mass tourism. Although the local hospitality sector is presently attempting to curb this issue, hotel occupancy continues to maintain over 75% bookings. Numbers like this have not been seen since 2008.

Interestingly, an offshoot consequence of the current Asian monetary domination, is the development of various hotel branded real estate projects. Such complexes that previously catered to people wishing to reside in said properties, are now more geared toward those seeking them as strictly an investment.

Fortunately, the new Terminal X at Phuket International Airport will take a great burden off the airport’s main terminal dealing with the overflow of arrivals. This secondary structure is not only welcomed due to the increase in Chinese visitors, but also the recent inflow of both Russian and Eastern Europeans as well.

It remains to be seen if the island’s infrastructure and tourism industry will be able to cope with the apparent inundation of these new demographics in the future. One can only hope that there will be a reasonable and acceptable balance between its vacationers, and what the island can accommodate with regards to sustainability.